I want to talk about the Tosowoong Aloe Sheet Mask ($2.00) because it did something really strange to me.

I have had this small… er… population of lurker zits hiding under my right cheek for at least three months, likely more. You know, the kind that you can feel underneath your skin, but they just haven’t shown their ugly faces. I even went to get a facial and when I left they were still torturing me. The Tosowoong Pure Aloe Mask brought those things up to the surface.

THE TOSOWOONG PURE ALOE MASK BROUGHT THEM UP TO THE SURFACE!!!!

In case you didn’t get the severity of the statement. Those lurker zits have been bothering me for quite some time (again, at least three months) and I was super surprised to see those ready-to-be-extracted zits sitting on top of my skin the next morning. I am dying to hear if anyone else has had this experience with this mask or aloe in general. This certainly  makes me want to start bathing in aloe! The mask fit me pretty well, except in the usual places: the tip of my nose and my hairline. The mask has a whopping 23g of essence and there was plenty left over to slather over my neck and collarbone. Also, this mask smells almost as good as Papa Recipe Bombee Honey Mask! 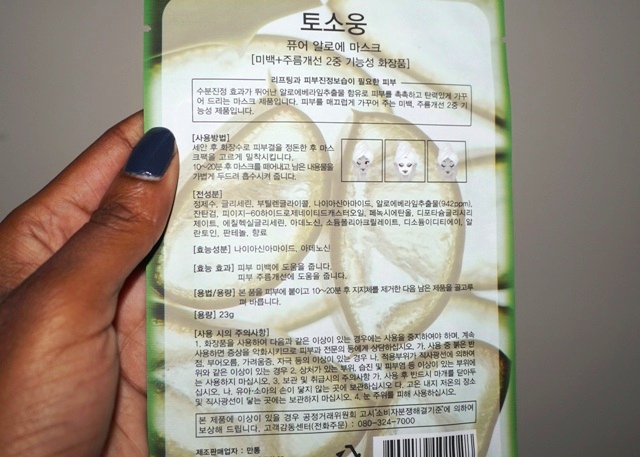 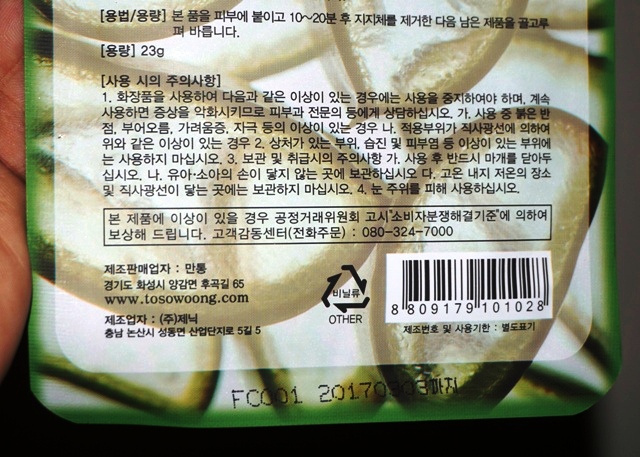 In Korean, but here are the ingredients, courtesy of Memebox: 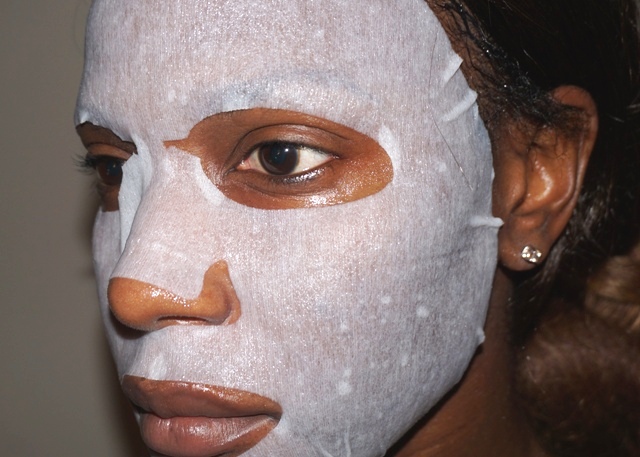 I left the mask on for 40 minutes (with the help of my Daiso silicone mask) and followed up with a night-time regimen consisting of Shark Sauce, Valentia Clear Lift Revitalizing Serum, Murad Hydro-Dynamic Quenching Essence, Murad Hydro-Dynamic Moisturizer, and Skin Inc. Pure Deep Sea Hydrating Mask. I should also mention that I used Skinfood Egg Pore Mask before sheet masking, which I used previously and was giving a second chance — more on that later. So I know it was the sheet mask that revealed my zits’ true identity because I had been using this routine for a while, had used the Egg Pore Mask before, and the only thing I did different was the aloe mask.

I don’t think I need to say that I highly recommend this mask. On one hand, I love that it got rid of those lurkers, but on the other hand I am not looking forward to the darkness that follows 🙁

I always get acne scars from breakouts. In addition to all the amazing stuff I mentioned, the mask left my skin feeling smooth and supple. It was temporarily brightened and a bit sticky after the essence dried down. Both of those non-issues were fixed after rubbing in all my other skincare products.

Tosowoong has been my JAM lately! First, that bomb ass sparkling mask and now this. Can’t wait to try more!