I have been wanting to try out Kevyn Aucoin’s foundation for some time. I know the brand has a stellar reputation when it comes to makeup, but for me, I could never truly appreciate that because I found myself mostly drawn to the foundations in the line and could never find a place where they were readily available for swatching. And when I did, only the fair skin tones were available. Well, that’s changed at the Sephora near my apartment.

Sephora has vastly expanded the Kevyn Aucoin display to include foundation shades for darker skin tones and added a lot of other products from the line. I swatched the Etherealist Skin Illuminating Foundation ($58.00) in the three darkest shades available at the counter: 13, 14, and 15. As I understand it, there is a shade 16, which if I had to guess would differ to 15 in undertone. It’s supposed to have medium coverage.

I was more curious about the Sensual Skin Enhancer ($48.00) than anything. I only swatched two of the colors, 15 and 16 before deciding on 15 for myself. The Skin Enhancer is really thick; likely the thickest foundation I have ever tried. Allegedly, Mr. Aucoin was inspired by Japanese Geishas in Japan. It claims “sheer and complete coverage,” and I totally get that. I didn’t wear any foundation the day I swatched these so that I could try them out directly on my face. 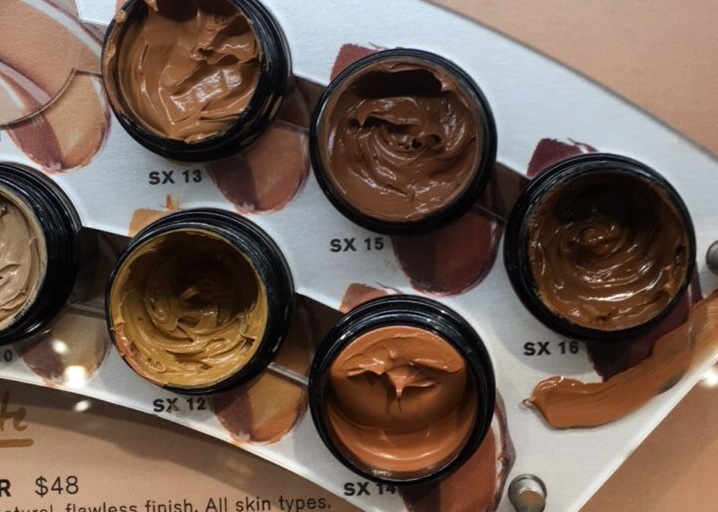 I chose 15 based on the swatch above, and took it on vacation with me as the only foundation I would carry. It appeared to have less of a red undertone compared to 16. I plan to do a full review on the foundation, but I will just say that Sephora needs to do something about their lighting! As beautiful as this looked on me in the store, in natural light, 15 is still pretty red on me, similar to my Make Up For Ever Mat Velvet+. I only noticed this when I got to the U.K. and had previously decided that this would be the only foundation I would bring with me. In the end, it settles nicely. I will have to live with this, as it is a fantastic foundation.

Is there anything else from Kevyn Aucoin you all would like to see swatched? The brand’s eyeshadows are supposed to be great. Perhaps I will venture into the powders next, if my color is readily available.