Today I will be doing a review on a liquid eyeliner pen
called K-Palette
1 Day Tattoo Real Lasting Eyeliner. It advertises 24 HR eyeliner power. We
shall see… I purchased it in New York in Chinatown from a Korean makeup shop.

I typically like a really intense line for my eyeliner. I have almond shaped eyes, sparse lashes, and even sparser eyebrows. I also have very oily eyelids! Perhaps even more oily than my skin! As a result, if I do not use a base on my eyelids, the eyeliner smears and melts, and spreads up to my brow bone; I look like a raccoon by day’s end. However, sometimes I am lazy and don’t use the base, which is normally the Urban Decay eyeshadow primer (the old package). This was the case while testing out this new eyeliner.

The pen itself is of a standard length for a liquid eyeliner pen. The felt tip is pretty sturdy which I like.

I did find that it didn’t seem to be as black as the Maybelline liquid eyeliner pen, which replaced my Eyeko Skinny Liquid Eyeliner. I wore it without eyeshadow and with pencil eyeliner on the lower lash line.

I applied the eyeliner around 7:30 am and the pictures were taken around 7:30 pm! So it at LEAST has 12 HR power. As I examined my eyes I noticed that the eyeliner had not smeared to my brow bone either, so this was a significant improvement from ALL other eyeliners I have tried. I ended up removing my makeup around 8:40 pm so I cannot really say if it has 24 HR power. I’ve been really good about removing my makeup at night so I likely won’t be able to testify that. However, it does last all throughout my work day without running or melting! 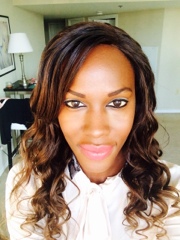 Pros: Lasts throughout the day, and likely into the night, but I won’t sleep in it.

Cons: I did notice a little irritation on my eyelid where I had applied the eyeliner, but I also notice that with the Maybelline eyeliner as well. And by irritation I mean the skin was just raised a little bit.